Report Launch: Energy poverty: a priority or an empty promise?

You can find the full report on our website: https://righttoenergy.org/resources/

New analysis of national plans, policies and measures in six Central and Eastern European countries, reveals inadequate action to tackle energy poverty. The report, prepared by NGOs and researchers across Europe, finds that Croatia, Czechia, Hungary, Poland, Slovakia and Slovenia have failed to provide a clear definition of  energy poverty in their national plans, a bare minimum required by the EU.

The report, “Tackling energy poverty through National Energy and Climate Plans : priority or empty promise?” was launched with Climate Action Network Europe at a special debate as part of the Right To Energy Forum 2020.

Member States are required by EU law to use their National Energy and Climate Plans (NECPs) and Long-Term Renovation Strategies (LTRS) to set out definitions and indicators, timeframes and policies to reduce energy poverty. More recently, the European Commission has identified citizens affected by energy poverty as one of the three key priorities of the Renovation Wave and published its Guidelines on Energy Poverty to spur member states into action.

This report shows that tools, policies and measures in all of the analysed National Energy and Climate Plans fall short on addressing the root causes of Europe’s energy poverty. In addition, none of the countries covered in the report, except Czechia, have submitted their final Long Term Renovation Strategies (LTRS). Czech’s LTRS also doesn’t include an overview of measures to tackle energy poverty which severely affects the Ústecký and Moravskoslezský coal regions in the country. 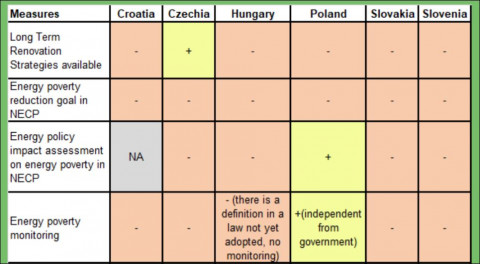 Energy poverty is an ever pressing problem for all six countries. In Slovenia, for example, 22.7% of the population live in apartments with a leaking roof, damp walls, damp floors, or rotten window frames. In 2017, in Croatia, 17.5% of the population are unable to pay their utility bills on time due to financial difficulties, while the EU average is 6.6%. Slovakia also has one of the highest levels of expenditure on energy bills when compared to the overall household budget spent (23.4%) in the EU.

The report calls on Member States to immediately start addressing energy poverty and improving people’s quality of life, as the ongoing pandemic forces millions to live in energy poor homes. It also offers solutions and urges the European Commission to ensure ambitious ring-fenced funding for housing renovation and to propose measures to at least triple the current rate of renovations, while adjusting all necessary legislation to ensure households affected by energy poverty are reached.

“As Covid-19 crisis pushes millions of European households to the brink this winter, Europe’s energy poor are being let down by serial inaction. This analysis shows that every country we analysed is failing to tackle widespread energy poverty – they’re not even close to doing the bare EU minimum. We call on Member States to reassess their plans in light of the EU’s Renovation Wave, for a green bailout prioritising the energy poor, and for member states to put in place solutions so no-one is left in the dark and cold.”

“It is clear that the Central Eastern European leaders must immediately start developing national policies and measures to protect the most vulnerable households and connect these policies with measures around energy efficiency, renewable energy, buildings renovation and protection of vulnerable consumers. Unlocking the EU budget and increasing the EU’s 2030 climate target in the December European Council will not only support the development and implementation of these measures but also help the EU become a step closer to achieving the Paris Agreement objectives.”

“Energy poverty is a big problem in Poland and has a strong correlation with a level of air pollution. Most air pollution in Poland comes from small coal stoves used in private housing. The stoves need to be changed, but many people can’t afford it. Here the energy poverty lies deeper, than just in a level of energy bills. In spite of the fact that national authorities started to address the problem through the “Clean Air” program, there still needs much more to be studied and done. Local authorities and social organizations could be more active in providing support, but they seem to be blocked by the national law. This local potential needs to be unlocked.”